For my first foray into r-markdown (and getting it more-or-less directly into a jekyll blog), let’s have a go at calculating a `route factor’ for Great Britain and seeing how it changes for shorter/longer distances. The data comes from Google’s route matrix API. I won’t cover harvesting that data - the source code and explanation for that is here along with the code below and a copy of the CSV data.

The ‘route factor’ is just the ratio of a route distance between two points over its Euclidean distance (or Great Circle equivalent, which is what I use here via the sp package). So if the distance to drive a route is twice as far as the crow flies, the route factor is 2. In modern parlance it’s known as circuity (note the handy diagram in that link) though I first picked the idea up from this rather wonderful 1979 geography textbook and now can’t stop calling it ‘route factor’.

I’d originally harvested google distance data in order just to show that, if goods were moving between random points in the UK, the distribution would be clearly different from the spatial decay present in the ‘goods lifted’ data (it is). The idea of the route factor itself became useful when I had two different sources for how far freight goods move within the UK - one was over Euclidean distance (trade between the now defunct Government Office Regions), the other a route distance given by hauliers in a survey. The two results almost, but not quite, agreed on the spatial decay of trade. If adjusted for the route factor, would they match? (Pleasingly, they do.)

This data also offers the intriguing possibility of checking how circuity changes depending on the route distance. Intuitively, one would expect that shorter routes would be more wiggly and, for larger journeys, the ability to utilise more major roads would increase the efficiency. We’ll take a look at that here.

I’ll be using sp’s spDist function to get the great-circle distance between points - in what seems like a clumsy way to me, so it’d be good to hear about better options.

So here we go. First, the libraries and data we’re using…

The API is cunning: in routesRandomiser.R, all I do is pick a completely random point within a shapefile for Great Britain and it picks the nearest actual address point - as you can see (using knitr’s nice table formatting) from the ‘origin’ and ‘destination’ fields:

So we know we’re getting actual random network routes. We’ll be using origin/destination lat/long coordinates (origin_x / origin_y and dest_x/dest_y) and, of course, distance - which needs converting to kilometres to match the upcoming sp function:

For ease of reading, let’s subset origin and destination coordinates.

And I’ll be adding the resulting great-circle distances back into ‘routes’, so:

Now for the bit doing the work. The spDistsN1 function is actually set up to find a full vector of distances between a single point and a bunch of other points. I couldn’t find a less tidy way to persuade it to give me distances between a sequence of pairs. Here’s what I managed. Cycle through each of the ‘origins’ and use that as the matrix of points it wants (it just happens to be a single point in this case, but it needs to be passed in as a matrix). The destination can then just be the single point. ‘longlat=TRUE’ returns kilometre great-circle distances.

Right - we have our straight(ish)-line distances to compare to Google’s road network distances. Route factor ahoy! I’m going to also find route-factor-over-one, which will make sense in a moment.

We can get a decent graph of the route factor, but the direct numbers are much more amenable to a histogram if we’re asking “how much shorter is Euclidean distance?” Thusly: 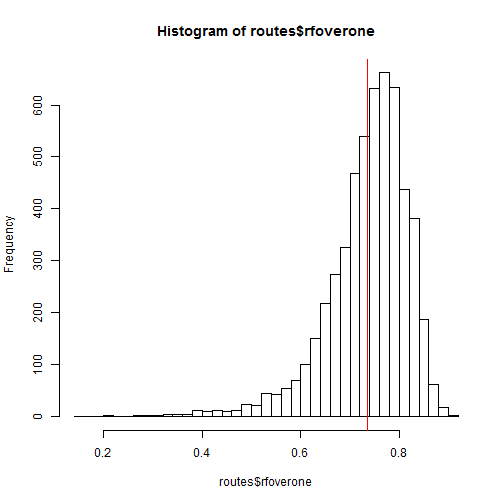 So - how does circuity change for the size of journey taken? To find out, let’s make a function that will stick a range of distances into bins of equal sizes, so we can easily show the difference that the number of bins makes. “Cut2” does the binning, providing an index we can use.

This function gives us the average route factor in each of a set number of equal-size distance bins, using the average distance in each to give us matching row numbers (“g” in the cut2 function splits into equally-sized quantiles). Let’s see what ten bins looks like to start with: 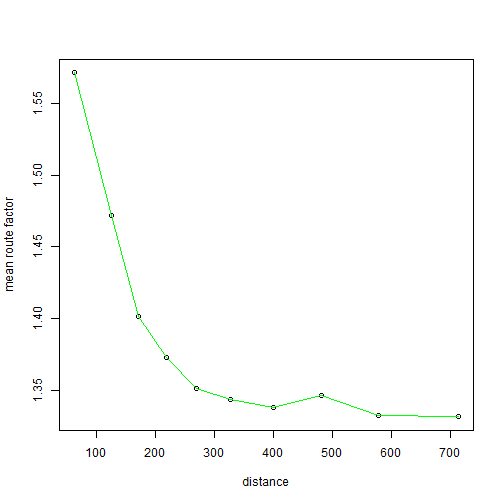 Boom! Circuity is higher for shorter distances. For higher bin numbers, though, the drop-off isn’t quite so smooth. I suspect this is more likely to be due to the number of route samples than the underlying pattern. 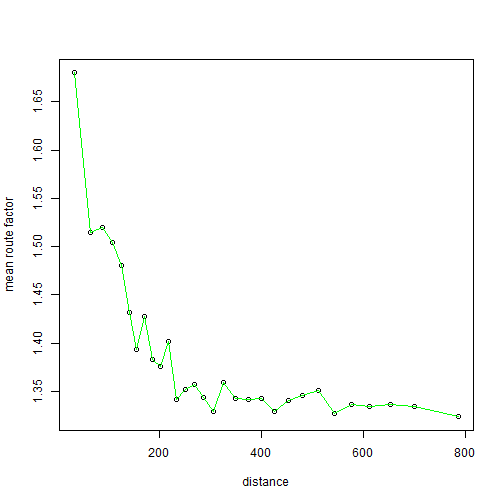 A few thoughts to end on:

One last graph: the distribution of circuity in each of the bins shows a little more what’s going on, certainly at shorter distances. Let’s add the bins directly to the original routes data to see: 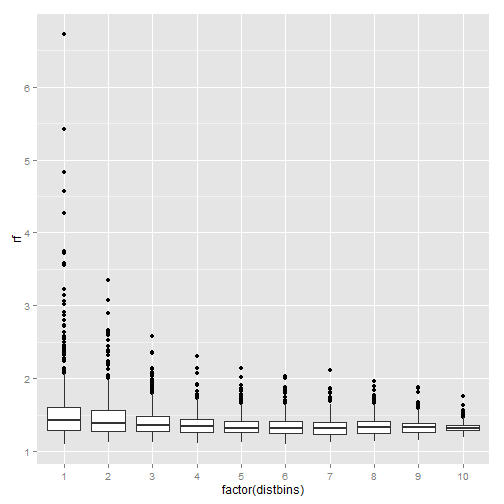 Whoo - some outliery craziness going on there. Route factor of more than six, you say? Ah, that’d be this. Despite having asked the API “avoid=ferries”, it appears to be taking some routes across the sea by car. So a closer look at the data perhaps required. Restricting random routes to England and Wales might also be an idea.

So there we are, first rmarkdown experiment over. That was quite pleasing if rather time-consuming. The process certainly couldn’t be easier though. (I’ve said that before attempting to transfer to Jekyll. Let’s see how that goes…)

Jekyll note: as I didn’t have one, I nabbed this syntax highlight stylesheet via here.